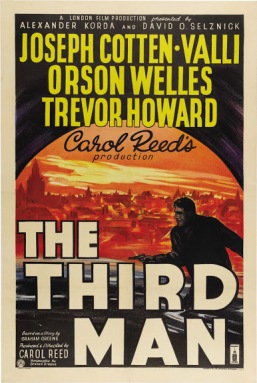 The Third Man is perhaps the best known film from British director Carol Reed.  Set in an atmospheric, tired and cynical post-war Vienna, the film tells the tale of an American novelist who arrives to meet a friend, only to find that he has recently died; hit by a car.  He stays to investigate his death which soon becomes a search for a “Third Man” who was present at his death. END_OF_DOCUMENT_TOKEN_TO_BE_REPLACED

It seemed appropriate to watch a horror film on Hallowe’en, and it just happened that A Nightmare on Elm Street was on.  Since this is the first Hallowe’en since Wes Craven died, I thought that this was also very appropriate.  Having set up his stall firmly in the horror genre with Last House on the Left and The Hills have Eyes (neither of which I’ve seen I must admit) it was this story of sleepy slaughter that really announced Craven to the world.

END_OF_DOCUMENT_TOKEN_TO_BE_REPLACED

At the end of March 2012 my contract came to an end on my then job; 4.5 years working as a Microbiologist for the University of Aberdeen.  As a leaving present I got some wine, some beer, a framed photo and this rather enormous book.

So this “new project” is a sort of life-project kind of way! I am under no illusion that I would ever manage such a feat; still it would be nice to make quite a dint in the list.  At a quick count I’ve seen 160 (actually 183 now) on the list.  So just 841 to go then!  Organised in chronological order the book ranges from Le Voyage dans la Lune (A Trip to the Moon) from 1902 directed by Georges Méliès, all the way to the Coen Brothers True Grit in 2010.  There are all the classics that you would expect to find, as well as (to me) surprise entries such as Groundhog Day, This is Spinal Tap, or Young Frankenstein.

There is a nice checklist at the beginning of the book which I shall keep on top of, but I will also now label all films I watch with 1001 Movies (and probably retrospectively label others) to keep track of them.  So here’s to watching lots of great films, and many thanks to everyone in my lab who contributed to the gift.

I’d heard good things about District 9, but I still expected something akin to Battle for LA.  What I didn’t expect was a documentary style sci-fi film that was more of a commentary on the politics of Johannesburg townships and refugee camps than a film about shooting aliens.  Though what was even more surprising was the fact that the first name that appears on the screen was Peter Jackson!  How did I no know that?!

END_OF_DOCUMENT_TOKEN_TO_BE_REPLACED

Oliver Stone gives us a film that is completely over the top in style, but completely brilliant.  He barely gives us time to get used to one style or angle before he’s on to the next one.  Now black and white, now colour, this angle, that angle; filmed through a camcorder; animation and a whole section done as a naff 70s sitcom (complete with canned laughter) about child abuse and wife-beating.

END_OF_DOCUMENT_TOKEN_TO_BE_REPLACED 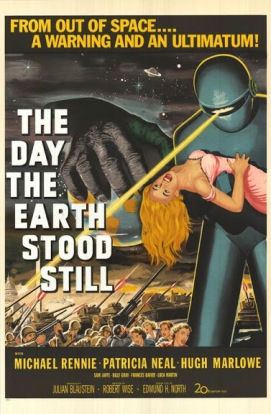 Far from the CGI-heavy, plot-light 2008 version, this 1951 Sci Fi classic is a character-driven critique of cold war paranoia and burgeoning environmentalism.  Unfortunately due to its age it also slightly suffers from the shoot first ask questions later mentality that plagues movies of this era; though certainly not a deal-breaker in such a fine film. END_OF_DOCUMENT_TOKEN_TO_BE_REPLACED